After visiting the wonders of the Golden Circle, we kept driving eastward getting into the region of waterfalls and glaciers. The day began with 2000 Icelandic krónur of fuel, that for 1⁄4 of the tank. Expensive, but not as expensive as one may guess, from prices in Spain. It continued with the first sighting of lambs in the middle of the road… Get used to that, it is very common!

Our first landmark for the day was the wonderful, and sadly very touristic waterfall Seljalandsfoss. It is a crowded place (by Icelandic standards, meaning there were around 50 people around), basically because it is very close to the Golden Circle and whereabouts of Reykjavik. 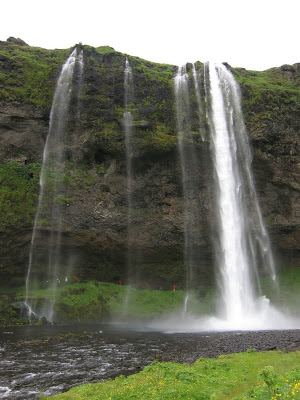 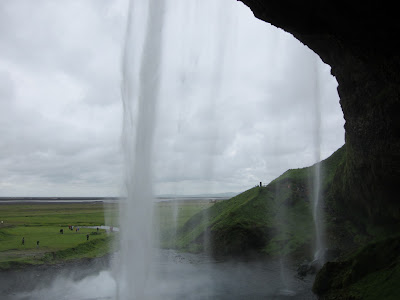 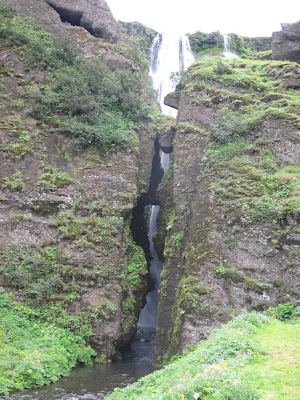 Walking behind a waterfall is wonderful

Its main selling point is the fact that you can walk behind the waterfall along a slimy path. You will need a raincoat to do so (you are not forced to use it, but you’ll get soaked), don’t forget to bring one. An odd remark I got from this place: the FiveFinger KSO, as good as they are for running in warm climates are really horrible for cold and wet places. I put them for this walk, and would not do it again for the entire trip… 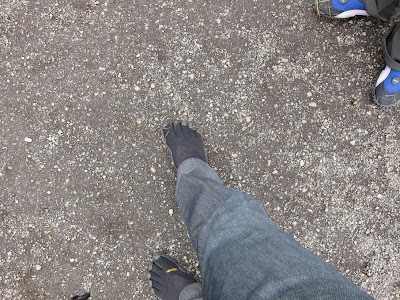 If you happen to visit Seljalandsfoss, don’t miss the small, unnamed waterfall to the left of it. Follow the path along the mountain and you will find a fissure in the middle of it, with a shiny waterfall. Laia went inside this one until almost knee depth to take a picture. You can bet, the water was extremely cold.

Our next stop should have been Seljavallalaug, a hot water pool somewhere. We just didn’t find it and kept en route. Icelandic language fact: Laug means bath or bathing, Saturday is Laugardagur: the day of the bathing.

Next landmark: the second biggest waterfall so far, Skógafoss. Not as majestic as Gullfoss or as entertaining as Seljalandsfoss when we arrived, but it was one of the most interesting, now you’ll know why. 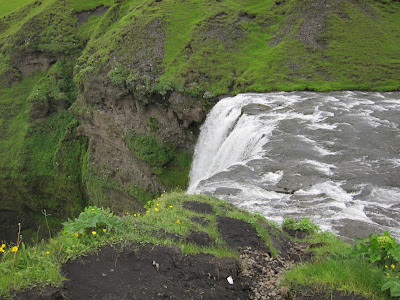 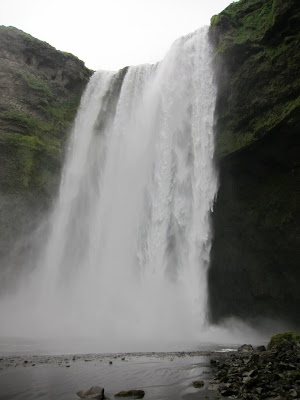 Skógafoss, with a close up

First we went up the waterfall along a wooden stairway to see the views from the top. They were not that nice: the day was cloudy and very windy. On our way down we could stand upright just by the wind strength. Also of note is the recommendation to open the car doors carefully. A wind gush could easily tear the hinges.

We went down, and the waterfall was mostly deserted… And we took advantage of the Icelandic mentality: walk wherever you want, at our own risk. There are no red velvet lines anywhere, and we walked just below the waterfall and took some pictures. There was a lot of drizzling in the zone, so if you want to do the same, be prepared and bring a raincoat (as I said before) and if you have a point-and-click camera, some kind of lens protection to keep it from getting wet.

Do you remember Eyjafjallajökull? Yes, that volcano that covered half Europe in ash. Sólheimajökull is a glacier just beside it. Its Icelandic name means The home of the Sun glacier… But the ash cloud turned it pretty darkish. 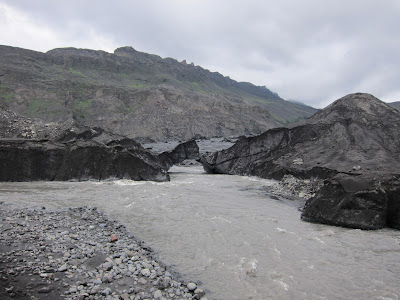 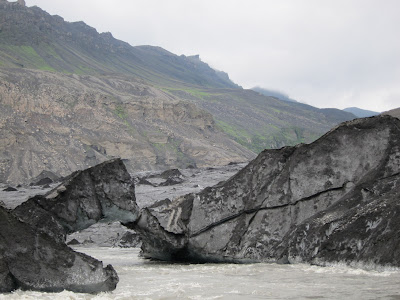 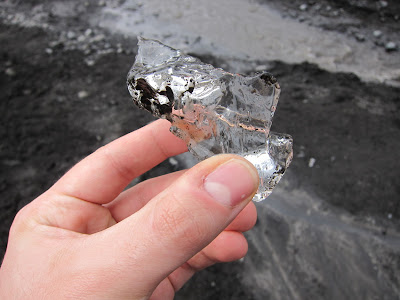 This glacier has a relatively good road leading to it, and can be visited and walked around. With relatively good I mean that we made it, but there were some moments when we were not as sure. Anyway, we saw cheap class A cars and tourist buses doing it, so don’t be afraid. But be sure of knowing how to change a flat tire.

We walked around a lot, collecting rocks, volcanic ash and admiring the landscape. We had our first glimpse of clear glacier ice, below the volcanic dust. We walked a little over the ice of the glacier, but it was clear that mountain boots were not enough and we went back to the car. We were hungry…

Dyrhólaey is a wonderful volcanic cape, overlooking black volcanic beaches. The road was very rough, with a cliff just 50cm from my window, but the views were worth it. Going straight you can see a full 360º view of black beach and a cut down cliff, just beside Dyrhólaey lighthouse. Be prepared to an incredibly strong wind. 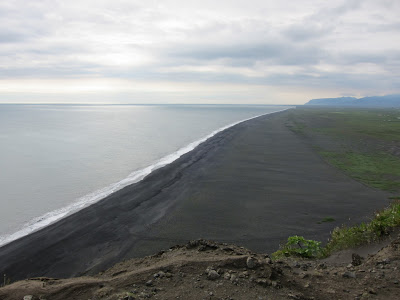 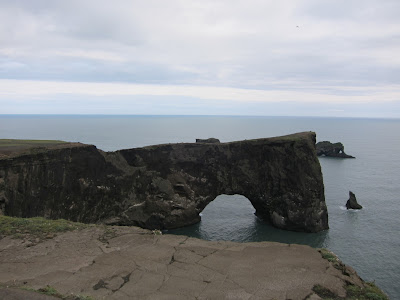 View from the lighthouse and the Dyrhólaey cape

Going to the left of the road you get to the other side of Dyrhólaey, another small cape with very interesting views and an odd phenomenon: a sea geiser. When the strong wind, sea level and the rock formation coincide, they just form sea water gushes into the air. We were there at around 6pm, and it looked like a very good time to see that happen. Below you can see several shots of this event. 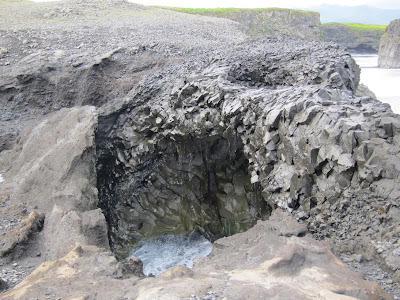 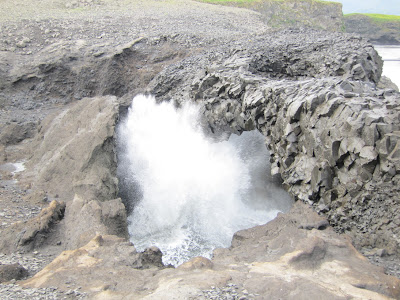 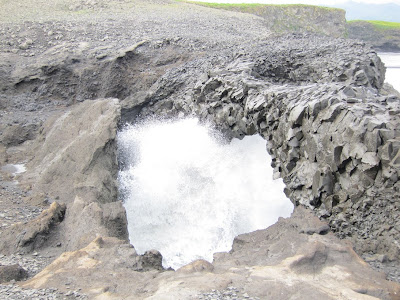 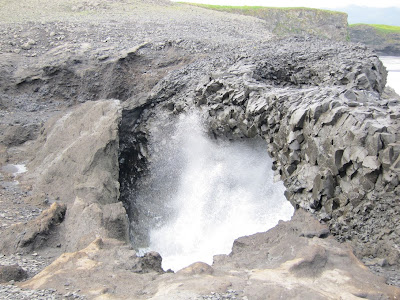 The water gush next to Dyrhólaey

The final highlight of the day were the basalt columns in the beach at Reynirsfjara. They were nice, but after everything we saw this day, a little lame. We would see similar formations in Stykkishólmur a week or so after. We walked around the beach and collected rocks, as we have been doing for all the trip. If you also enjoy collecting sea shells, in Iceland there are not that many. Don’t be disappointed. Icelandic language factoid: fjara means beach. 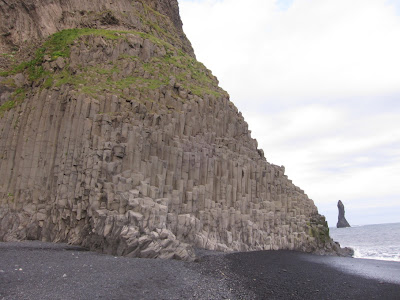 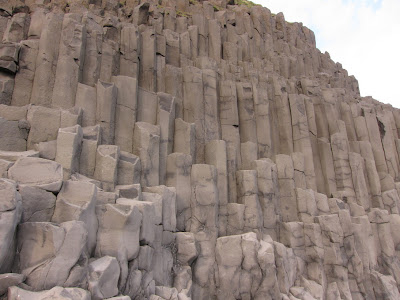 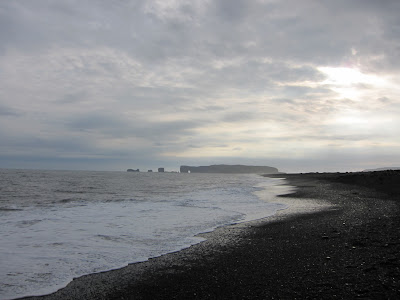 Finishing the day: Supper and the lava field of Eldhraun

We stopped at Vík to have something hot to eat, and phoned our hotel saying we would be arriving late (the wonderful thing of a prepaid Icelandic phone is that you can do this). Had a wonderful hot soup, awesome after a very cold day.

We drove along Eldhraun, which is a generic term in Iceland for lava field. It looks like a desert with very big rocks covered in Icelandic moss, very very thick. We saw Kirkjubæjarklaustur’s church and drove for a while looking for the Kirkjugólf, a basalt formation named the church’s floor. We didn’t find it, but the next day we would make it. Drove to our hotel, which although was under remodelation, was pretty nice… and had free wifi!

In case you are interested, we drove for 534 km today. A long day, indeed!