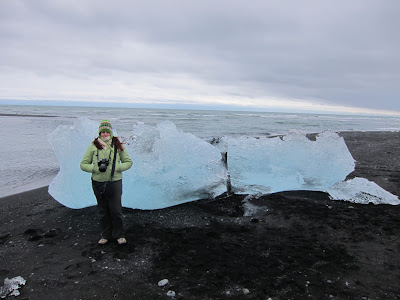 Happy World Water Day! Luckily the post due for today was a lot of water in it, iced water sparkling of thousand years old blue ice. This was supposed to be our puffin visit day… But schedules played badly on us and we could not make it. We just made another round of Jökulsárlón icebergs while collecting shoreside rocks.

While we were having breakfast we saw another guest in the lovely guesthouse at Hofell… and he surprised us by asking if we were Catalans, in Catalan! This is how we met Jose, a cook from Alacant, Spain. He came to Iceland 13 years ago, and has done a range of restaurant related jobs, currently he is working as a cook.

It was fascinating as he explained his feelings and adapting to Iceland. For example, he told us that without Icelandic you don’t have access to any good job… But once you pick it up (it took him 8 months) you are done and can rise pretty quickly. He is really happy about being there, only missing a little the standard Mediterranean stuff, like plenty of sunlight.

His view of the supposed big economical crisis of Iceland is amusing, seen from the outside world. What he observed is that people stopped taking vacation 5 times a year and took them 3 times a year instead. I don’t know if this is the trend or it is just what happened in the restaurant businesses, but if true would just mean that it wasn’t that bad.

As I said before, our plan for today was to visit Ingólfshöfði, a nature reserve acting as a puffin nesting area. Ingólfshöfði is the place where the first settler of Iceland, Ingólfur Arnason set foot, and named Ingolfur’s cape around the year 874.

The visit is done in a trailer pulled by a tractor and takes around 3 hours. What we did not know is that there is only one departure each day, and it is at 12:00 (if I remember correctly, maybe it was at 11:00). The point is we arrived something like 20 minutes late. And the weather was (how may I say it?) pretty Icelandic.

Today was the first time we saw gale winds in Iceland. Really impressing and strong… And cold. We considered walking to catch the tractor but we were freezing after just a few meters. Change of plans needed…

As we had enjoyed a lot yesterday’s visit to Jökulsárlón, we decided that our best bet was to head there again. Spent the whole morning walking around the sea shore, picking rocks and taking pictures of big lumps of blue ice. In retrospect, I recommend you plan for a whole day in the Jökulsárlón: half a day for the lagoon and half a day for the sea shore. It is worth the time, you will enjoy it. 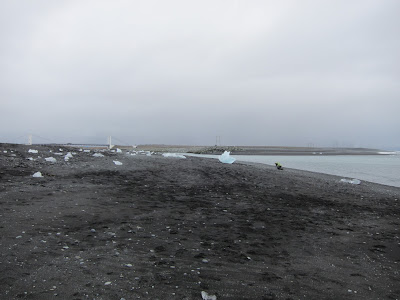 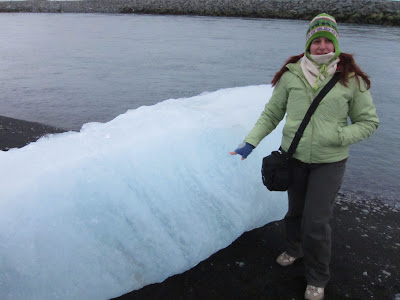 Back to the guest house

After our leisure walks around the Jökulsárlón, we came back to the guest house: it was time to have lunch. We took a long nap and visited again the house’s hot pots (pottana in Icelandic) to relax. Our first relax day! 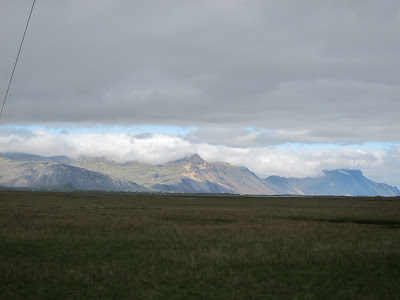 The view from the hotpots

Planning our route for tomorrow and supper… And it was time to sleep again, tiredness was growing again.

In case you are interested, we drove for 943 km today, although it looks like we did nothing at all.