Some of the links are affiliate links to Amazon. I only recommend what I use.

February. Finished my PhD dissertation, so can add Dr. in front of my name when ordering a Gatwick Express train ticket. Also makes for a cooler email signature. So far has been the only differences I’ve seen in the year

February-December Started working as a consultant in London, almost the day after delivering the PhD presentation. Not a big cause-effect relationship, though. Have done and learnt a lot of different things since then: 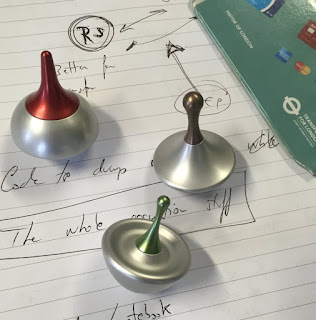 April-December Worked on some search engine optimisation analysis for a French company. Still ongoing, trying to get a 25% raise in organic search (right now at 10%)

August-December Started working on a personal project: an adserver for this blog, with a multi-armed bandit approach to serve relevant Amazon affiliates product ads. You can read up a little more about it in this post I wrote on LinkedIn.

February-December. Spent 3 weeks out of every 4 in London.

Became kind of a regular at the Café at Foyles in Charing Cross (awesome coconut and lime slice) and the Café at Waterstones in Hampstead (best scones I’ve eaten in London).

June Visited Hay-On-Wye, famed by its second-hand bookstores and eggs Benedict. Will repeat. Probably kidnap Jasper Fforde to get him to write Paint by Numbers

July Took a course in wood carving in London. Will repeat.

September Holidays in Collioure. Will repeat

Should have done it sooner

June Learnt to touch type and moved to using the Colemak keyboard layout, practiced at Keybr. Makes a huge difference to speed, accuracy and ergonomy. Should have done this way earlier in my life.

June Started eating parsnip, suggested by our product owner. Never had before, I’m liking it.

September Learnt to prepare brown butter thanks to Ruhlman’s Twenty. Ideal for some desserts, caramel sauces and mashed vegetables.

March-June Earned a postgraduate degree on Big Data and Data Science from the University of Barcelona.

February-December Attended the Spark, Emacs, Scala and ScalaX Bytes meetups every time I was in town. More sparingly attended the Data Science London, London Machine Learning, Python London, Go London User Group and Apache Kafka London, among a few other meetups I only attend on a interesting-talk basis.

June Took (as in, finished some) the Coursera courses about Scala. Will finish the rest eventually.

December Attended Scala Exchange 2016 London and Scala Exchange Hack day, where I got an introduction into contributing to Open Source. Trying to help with scala-native right now. Got a T-shirt with the text Scala contributor, which is nice.

This year I read 44 books, most of them non-fiction and mostly about self-improvement and data science.

I recommend Chronicles of Amber by Roger Zelazny as fiction and Never Split the Difference by Chris Voss as non-fiction. Technical, I’d recommend The Software Craftsman: Professionalism, Pragmatism, Pride by Sandro Mancuso

September-December Discovered Sonata Arctica and really enjoyed its songs. Specially partial to FullMoon and What did you do in the war, dad?

November Attended the first concert of the Chimera Orchestra in London

December Got these active-noise cancelling earphones for Black Friday. Work wonders to quieten a noisy office.

Aside from the ANC earphones mentioned above, this year I got

Introduced our company into the misteries of the Catalan tradition of the Caga Tió. Brought them one for Christmas.