I just want to introduce you Fatou, our little cat. 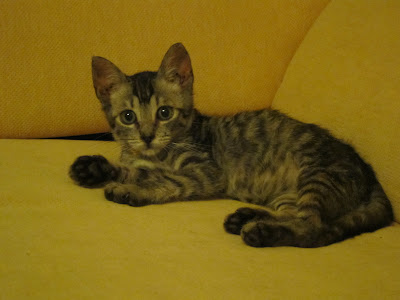 We adopted him last Saturday, and he is 2 months old. He is named after French mathematician Pierre Fatou… Mostly because Laia didn’t want him to be named Kolmogorov, and Fatou was the first mathematician name she liked.

He is very cute (as you can see), and well-mannered. Last Monday he had to go to the veterinary clinic for a revision, and the vet told us it is amazing how good he is: he even wears his collar! 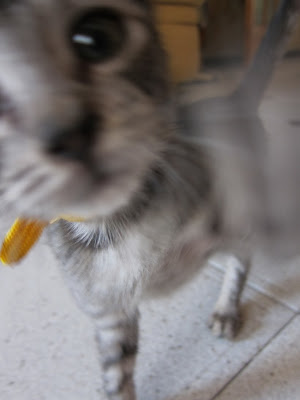 At the moment he has a cold, and sneezes quite often. He also loves wool strings and playing with balls, which he moves around with his front paws somewhat like a hockey player.

He has a little injure in his back leg which makes he misstep a little when he is running at top speed. The vet told us he is too young to really do something about it except keeping him from playing too much.

To avoid filling mostlymaths.net with posts with pictures from him, he decided on his own to open a (photo)blog at tumblr, which you can reach at Fatou The Cat. You can subscribe to his RSS here. He will probably post a picture with a small caption (or a video with a small caption) daily, if he is not napping, of course!

Come in and say hello to Fatou!