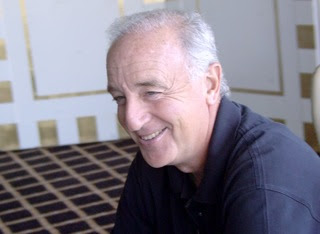 I guess there is not much need of an introduction for Steven. Just in case, Steven Pressfield is a best-selling author who started its career with The Legend of Bagger Vance and then started to write historical fiction, usually military themed. Some of his books (like Gates of Fire and Tides of War) have achieved cult status among military people, and they are even used as teaching material in some military schools. He is also widely known for writing The War of Art, a book which is best described by its sub-title: Break through the blocks and win your inner creative battles. A terrific book on stopping your creative procrastination and being a real professional. He also happens to be a blogger, writing in Steven Pressfield Online about several topics, don’t forget to check his blog.

Focused interview: three questions, three answers. I’m very happy to have here Steven for the second installment in this series (if you missed it, the first was Leo Babauta).

Q: In The War of Art you name the enemy of expressed creativity: Resistance (with capital R). You wrote two books just before TWoA: The Legend of Bagger Vance and Gates of Fire. When did you acknowledge this enemy, and how you decided to write about it? Why this sudden switch from fiction and historical fiction to non-fiction?

Steven: Actually I wrote five books, all novels, before I turned to “The War of Art.” But the concept of Resistance had been clear to me all along.

When you’re a professional writer who is working regularly, a lot of people (friends mostly) will get you aside and confide that they, too, have a book they’re planning on writing. But they’ve just never gotten around to it. Or other obligations keep getting in the way. I wound up spending many nights, till two in the morning, talking to friends and encouraging them to go ahead, do it, plunge in, write that book that’s inside you! I told them about my own struggles with self-sabotage. I came up with a name for this negative force. I called it Resistance. I told my friends that the excuses they kept coming up with (and believing) were just Resistance. Ignore this! Press on!

Of course nobody ever did, and I got tired of giving this same speech over and over. Then one time, after my fifth book, I had a couple of months free. I thought, “Why don’t I sit down and bang out all that stuff I always tell my friends. Then the next time someone tells me they have a book inside them that
they can’t seem to write, I’ll hand them THIS book and say, ‘Here, read this.'”

That’s how “The War of Art” came to be written.

Q: In The War of Art (and your blog), you say that you believe that books and music are already written, and we get them through our connection (imperfect as it may be) with the Muse. You even quote D.H. T.E. Lawrence’s translation of the “Invocation of the Muse”, from Homer’s Odissey. I prefer a line from a Keats’ poem “Read me a lesson, Muse, and speak it loud!”. Rituals play a powerful role in harnessing our creativity. What other rituals have you heard about from fellow writers and screenplay writers?

Steven: Actually it was T.E. Lawrence (“Lawrence of Arabia”) who translated the Odyssey. Forgive me, Ruben; I don’t want your readers to think we’re getting it wrong (Note from Ruben: it was my fault! Never trust a bad Google search more than your own faulty memory). I like your line from Keats too. I’ve never seen it before.

Rituals are powerful in any creative endeavor because we, the mortal practitioners, are dealing with forces from the unconscious, from the Muse, from the Quantum Soup –and of course we have no way to summon them or bring them forth upon command. We can only invoke them, which is to say offer up a prayer and render ourselves open to whatever signal we receive from the Great Radio Station in the Sky. Rituals and rites are the signals that we send out. They express our receptivity. They announce our quietness and our willingness, even eagerness, to listen. They abnegate ourselves. They renounce ego.

People can dismiss such acts as superstition (and, of course, in a way they are.) But, as you say, they are powerful tools in the hands of those who have found favor with the gods and stand ready to do their work.

Q: You are both a blogger and a writer, and as such stand somehow in the middle of the old publishing methods and the most recent ones. In these times of blogging, social networks and so much free content, how are “hardback” writers keeping afloat? How have you switch personally?

Steven: It’s always been tough for “hardback writers.” I don’t know how many writers support themselves and their families entirely on the proceeds of their literary endeavors, but I’ll bet it’s a pretty modest congregation. Most writers, I’ve found, have “real” jobs. They teach. They do other stuff.

The new world of free content, as you note, Ruben, isn’t making it any easier. Speaking for myself, I haven’t found a way yet to monetize my efforts on the web. So far, I don’t mind. I’m hoping this new universe will evolve and new forms will emerge. They’re already starting to. I’m very optimistic. First, I think that traditional publishing will stay strong. E-books will help, not hinder. And people will always want to hold real books in their hands. I know I do.

Meanwhile new forms of writing (and even literature) will emerge. Some will be short. Mini-books that we can devour in an hour or two, sort of like long magazine articles. Others will be longer, with embedded videos and hyperlinks, audios and interviews and stuff no one’s even dreamed about yet.

Myself, I’ve got feet in both worlds. I’m working on several projects that are web-specific, that’ll probably find their niche (if they do) in the e-World somewhere. But I also have a big, old-fashioned, long-term project in the works.

The world of art has never been easy. There has never been security. It’s always a gamble. Nobody ever knows anything. You have to be crazy to thrive in it. You have to do it out of love. And the world has always changed so fast that you can’t predict two years or four years into the future. You start a project, knowing that the world will be different by the time you finish it. Maybe the world will have moved completely past it. There’s no way to predict. You have to do it anyway, because you love it.

Thanks to Steven for this interview, and stay tuned for the ones that will come. Be prepared to buy his upcoming book, a kind of follow-up of The War of Art, called Do the Work

! Coming out in April 20th, you can start pre-ordering :) Update: you can read Review of Do The Work, by Steven Pressfield.

Personal Development for Smart People: A Not So Short Review

Book review: How to be #1, by Vince LombardiParseList(ScrambleList(Relateds(Productivity)),0)