Today (i.e. this day in our trip) was Laia’s birthday, and one of our personal landmarks in this trip, as we visited our favourite places: Svartifoss, my special place and Jökulsárlón, a place Laia loves. We spent almost all day in these two places and driving around, but they are probably two of the most remarkable experiences of our road trip in Iceland.

Today we managed to visit the church’s floor, the Kirkjugolf. It is a basalt formation in the ground, and its similitude to a tiled floor gave this name. In 1783 the Laki volcanic area erupted. Its eruption caused 6 million death worldwide, poisoned sheep all around Iceland (due to fluorine intoxication) and the ash cover lowered world temperature, causing crop problems in all Europe and Asia, provoking the worst famine in Japan ever. It is believed that the lowered crops in France the coming years lead to the French Revolution of 1789. The lava started flowing to this place, Kirkjubæjarklaustur and its local pastor gathered his congregation in the church and delivered what would be known as the fiery sermon, Eldmessa in Icelandic, reproaching the crowd for his sins and laziness. Then the lava stopped, just at the edge of the church, and the people at Kirkjubæjarklaustur were spared. To get to the Kirkjugolf you have to take the road 203 and have faith, as there is no clear indication of where it is. 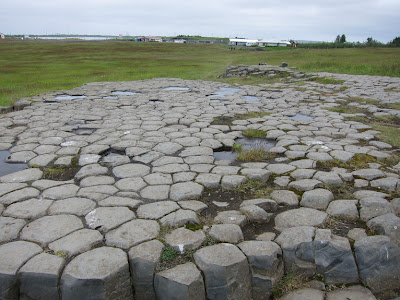 Now a pretty long and boring drive along the Ring Road. There were not a lot of interesting sights on the way, unless you love bridges. We passed a few, and there is even a bridge monument, to a “recently” broken bridge. It forms a stopping area, where you can take a few pictures of the stunning views of the Vatnajökull glacier and the Skaftafell area. A shorter drive by, and you get to the Vatnajökull-Skaftafell parking area, where a short walk leads to the Svartifoss waterfall. 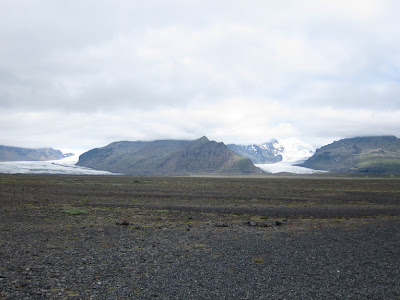 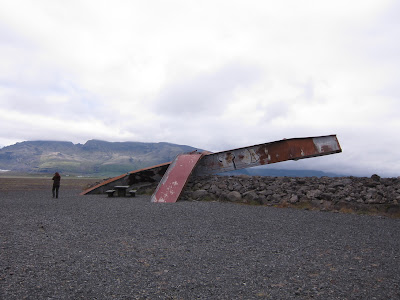 Svartifoss: only in Iceland could you find something as beautiful

Svartifoss is somehow a special place. The Hallgrimskirkja in Reykjavik is inspired by the hexagonal basalt formations of this waterfall, and once you are there you know why it inspired a church. The day was slightly cloudy and chilly, and the walk toward Svartifoss was a meagre 3.5km (approx, I’m talking from memory), and in the middle of the way (roughly 1.5km) you find Hundafoss, the dog’s waterfall. Small waterfalls like this start to get unimpressing… although it would be an awesome waterfall anywhere else in the world.

Then after a longer walk you arrive to Svartifoss. It is very odd, that you hear it long before you can see it, as it is hidden behind a sweep of the mountain pass. I’ll let the pictures speak by themselves. Maybe they don’t look impressive, the lighting was not very good, but I could have spent the day sitting there over a rock watching the landscape and listening to the falling water. It was this kind of special place. 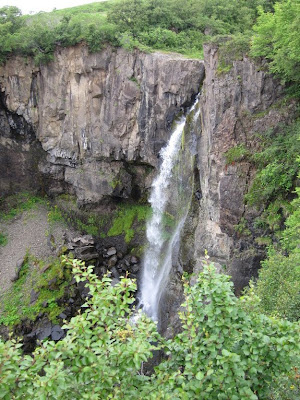 Hundufoss, on the way to Svartifoss 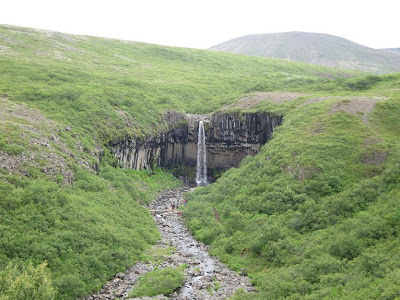 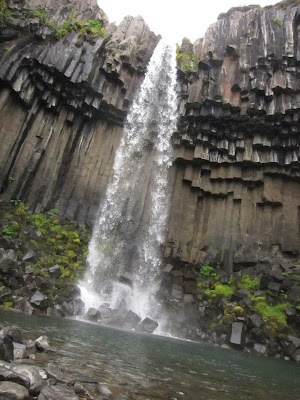 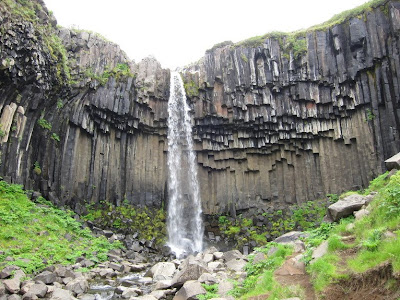 We had lunch in Svartifoss, and I drank a little water from the waterfall. As usual, it tasted wonderful and had a rocky aftertaste. As I have said before, everywhere in Iceland you can go as far as your legs will take you, but here there was a catch: there was a sign asking people to please, don’t step over the plants, as they are very delicate. Jumping over rocks you can get only this far, even more when the rocks are wet.

Jökulsárlón: Don’t be surprised when you arrive and see it

After we left Svartifoss, we followed along the road. We passed a place we wanted to stop, a puffin watching place. Puffins are typical birds of the area, they look like penguins with coloured beaks. We decided to stop there the day after, as we would spend two nights in the same guest house.

We kept driving and chatting, and it looked as if we were close to the Jökulsárlón, but we didn’t see anything. Laia was driving and I was looking around. At our right we had the sea, and in the left part of the road there were small hills (not taller than 5 or 10 meters), suddenly there was a small valley between two and I said Holy shit!. Laia was scared, and we were lucky as we didn’t have any other cars near and the road was in very good condition as she steered quickly thinking we were about to hit something. Be prepared, the sudden view of big lumps of blue ice out of nowhere can be really impressive. 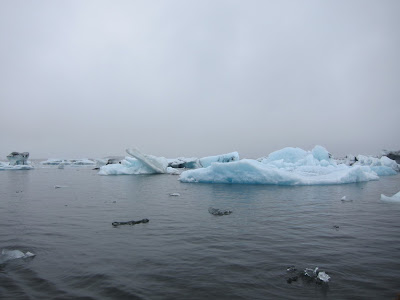 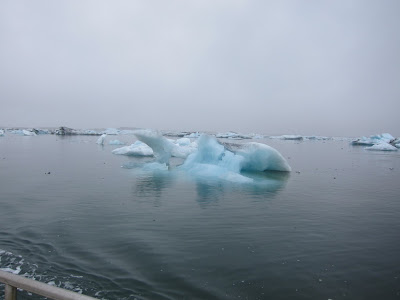 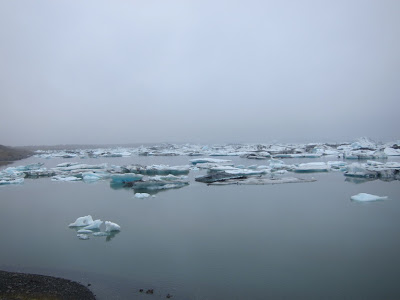 Some views of the Jökulsárlón. Lighting was not very good, but the place is stunning

We spent more than 2 hours in the glacier lagoon. This is the one and only glacier lagoon in Iceland, appearing as one of the smaller tongues of the Vatnajökull glacier is melting against the sea. This is caused by the contact with saline water, in quite few thousand years it will form its own fjord and the lagoon will disappear.

This is a very remarkable place… For example, it appears in James Bond’s A View to a Kill and Die Another Day, and also in Batman Begins. For the filming of Die Another Day, the lagoon dam was closed to lower water salinity, and the surface of the lagoon freezed. 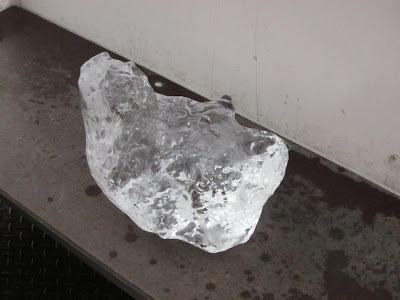 Glacier ice. It is clearer than normal ice because it
has been under heavy pressure since its formation

There is a car/boat tour of the lagoon: you board a boat with tires, and it crosses the lagoon. In the boat you will eat some glacial ice, which is amazingly clear and obviously cold, and you will see the icebergs from very close. You may also get a glimpse of seals swimming in the lagoon, but this is not guaranted. We saw one, and she kept swimming around while we were hiking around the shore. After this tour ended, we did the freakish thing of the day: there is a live webcam pointing to the parking (from Inspired By Iceland, there is a link named Iceland live). Laia phoned home, and we jumped around until her parents noticed us and wished her happy birthday.

We arrived at Hofell, where we had our guest house. It was nice, clean and the host was very kind: they have hot pots of their property 10 minutes away from the home, priced 350 ISK for everyone unless you are a guest, if you are a guest it is free. The views from the hot pots are amazing… You are surrounded by mountains, with views of glaciers and Icelandic mist, and you are covered in warm natural water. A experience you need to live. 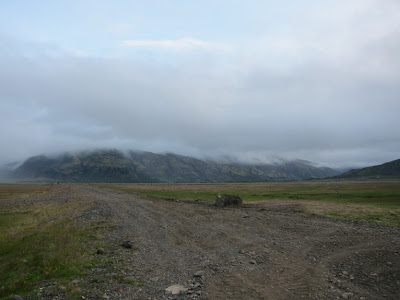 In case you are interested, we drove for 733km today.