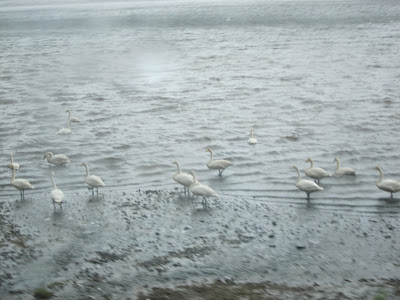 Geese in the East Fjords, Iceland

In the last 2 weeks I’ve had a big surge of visits and new subscribers, following the rise in HackerNews of my old post Timeboxing: You Will Work Like Never Before and of my newer post Learn to Remember Everything: The Memory Palace Technique. To put in situation, last July my girlfriend and me made a road trip around Iceland, and I wrote everything we did each day. Since then, I’ve written a series of posts named Things You Should Read Before Travelling to Iceland about food, shopping and related stuff, and also the ongoing series Road Trip Around Iceland. This is the 6th post in this series, you can navigate to the previous either through the previous link or in the navigation links at the end of this post. I hope you enjoy reading what I write from now on (but pardon me if this specific post is not great: it was not a fantastic day back in our trip!).

Today was our first fjord day (fjorðdagur?). We routed from Höfn to Egilsstaðir, but we could not make it beside the coast: the fog was too thick. Instead, we followed a mountain pass. Recommendation: if you don’t like heights, skip mountain passes. If you don’t like rain and wind, skip Iceland (just joking, I don’t like them and love the place).

We parted from Hofell early in the morning. Our route today would be pretty long, leading us to the capital of East Iceland, Egilsstaðir. Preparing for a long drive with not that many gas stations around, we fueled before arriving to Höfn. By the way, höfn means harbour, as you may guess this town is just beside the coast. After a while we started to admire some fjords, around Álftafjörður and Hámarsfjörður, our first sight of them. We also saw the day was cloudier above the fjords than around the flat coast. It has something to do with dominant winds, the gulf current and sudden straight walls of land (i.e. fjords).

The wind was very strong, blowing over the sea and against the shore. As I have previously said, in Iceland when the wind is strong, it is really strong. The kind of wind that makes your 2.5 ton car wobble a little when you are against a cliff and wobble quite a lot when you reach a valley and it can blow freely. The views were nevertheless impressive, the sea blowing against the sharp cut cliffs like steam out of a teapot. Round and round around our first glimpse of Eastern Fjords, we visited Djupivogur and the what one of our guides said it is the oldest shop in Iceland, where we could also take some coffee. 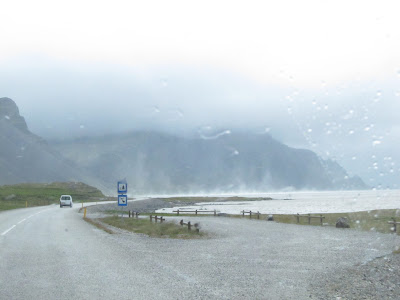 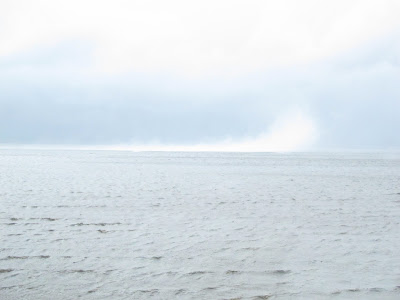 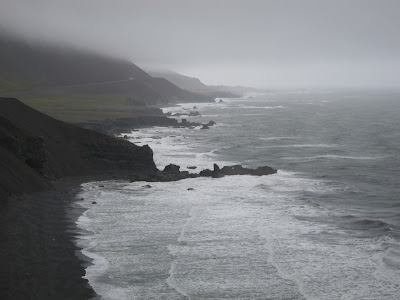 Our proposed route to Egilsstaðir was nice, along the shore seeing the fjords… But the weather turned on us: windy and foggy. We could not see from one fjord tongue to the next, there was nothing enjoyable about the views. We needed another route, quicker to get to our guest house as soon as possible.

So instead of making it along the fractal coast, we made for the straight line of a mountain pass through road 939, straight from Fóssarfell to Egilstaðir (unless I’m wrong, I can’t find my route map and had to rely on another road map I had at home, if I am it was from Breiðdalur to Egilsstaðir). The views up there were astonishing… But for a height-hater like I am, it was quite frightening. The route lasted for around 2 hours, but felt much, much longer. At last, we arrived to the flat area around Lagarfljót, a lake where according to tradition the local “lake worm” Lagarfljótsormur inhabits. The local version of the Loch Ness monster. A little further along the road, Egilsstaðir. 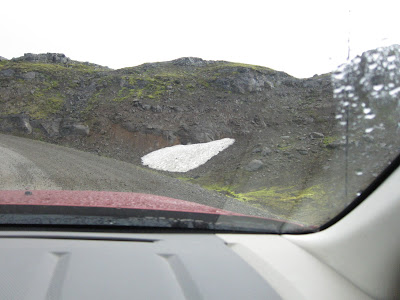 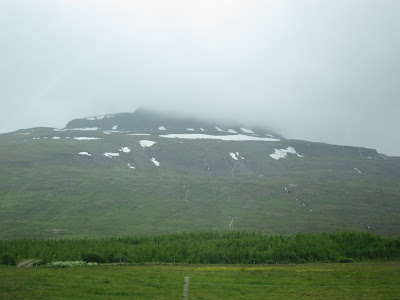 Two views from the mountain pass. I had no pictures from the top…

What can I say about this city? The first and foremost thing is that our small and free guide Around Iceland (which you can download for free in Heimur.is or get for free when you get to Iceland) had a map of the city, schematic but useful enough. The city is quite nice, although there is something missing: history. Egilsstaðir was founded in 1944, out of pure economic and logistic interests: there was no big city in the east of Iceland. West we have Reykjavik, south-east we have Selfoss, north we have Akureyri and north-east Isafjorður (a lovely city by the way!). The east area was not as populated and out of need, Egilsstaðir was founded. And it does a good job, being an entry point from the ferries coming from the Faroe, Denmark and Norway (entering through Seyðisfjörður).

This was the first time we arrived with a lot of time ahead to our guest house, a welcoming hostess told us what to visit in the whereabouts. According to her and our route, we set our sights to the puffin viewing area of Bakkagerdi and Borgarfjörður. 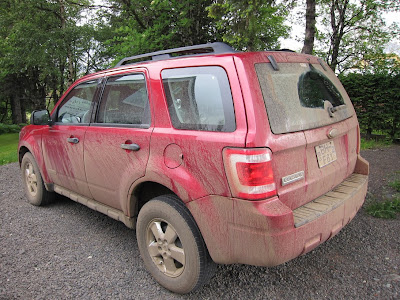 Our car got pretty muddy after the mountain

We thought we had seen Icelandic fog back in the south iof the East Fjords. Wrong. Our way to Bakkagerdi and Borgarfjörður was accompanied by thick fog, thick as in you-just-poured-shampoo-over-your-eyes kind of visibility. We could barely see 1.5m ahead of us (5 feet or so). 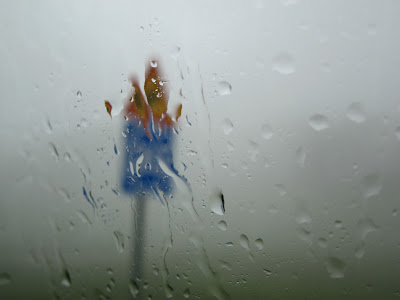 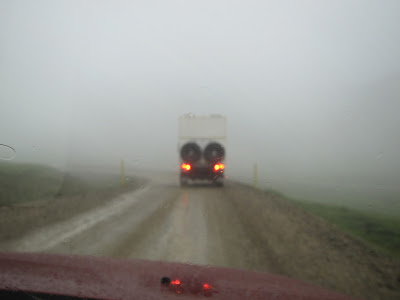 I have no pictures before the “high visibility” seen on the right: it was just all white!

It was also windy, and when we arrived at the fjords, windy as hell. All just to see some puffins! 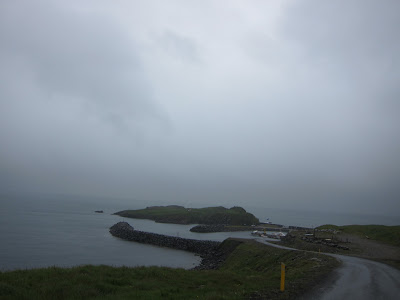 At first, we just had lunch inside the car and saw some puffins flying around: once you see one their flight pattern is clear enough to distinguish from similar birds (i.e. black birds). Finally we decided that we had made quite a long route to see the damn beast, got dressed with raincoats and walked to the viewing area, just 50 meters from us. We made it, you can see the pictures below, but we got soaked, wind and rain (may I say WIND and RAIN) are bound to get you soaked in a place like this. 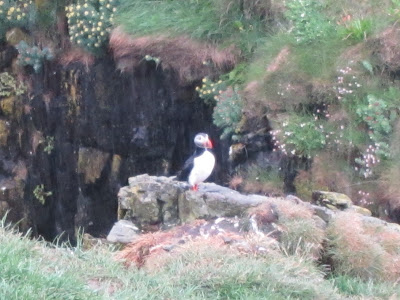 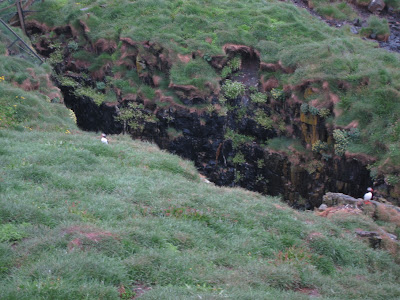 This cute looking bird is a (Atlantic) puffin, Fratercula Arctica

Luckily enough we found a place to eat something (named Alfacafe, go there if you have the chance), we had some hot chocolate which felt perfect after the rain and waited for the rain to come back. It didn’t and we just had supper there: I discovered that I like smoked trout, although I don’t like smoked salmon, I had the impression they would taste similar.

Headed back to our guest house, feeling really tired. At least we had a glimpse of puffins, but the day was quite disappointing: almost no fjords. Had a shower and had a short wifi spree to check news, mail and post something to our twitter accounts. The following day was bound to be more interesting: we would enter the volcanic areas around Mývatn and Hverir.