I “discovered” Nethack a month or so ago, while being bored to death (after three unsuccessful attempts in proving something) in my office.

Myself with my dog Hachi

I play the MacOs Tiles (or QT) version, which can be found in Nethack.org, configured for ASCII color play. The configuration file is a file called .nethackrc in your home directory, mine looks like:

This sets Nethack options as ASCII color map, my pet(s) have a heart near to them, lit corridor, change the boulder sign to 0 and my default name, role and such things.

What it is? Well, it is a dungeon exploration game: the objective is to find the Amulet of Yendor and sacrifice it to your god. You travel through the Dungeons of Doom, the Gnomish mines, Minetown and a lot more places (which I have not been to yet), killing foes, zapping wands and unearthing treasures. 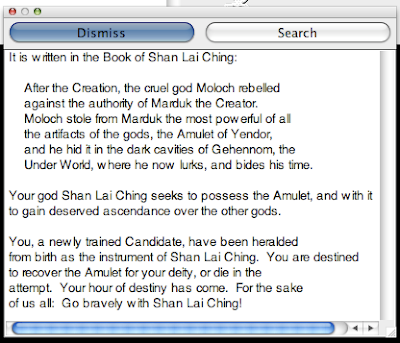 Your god and name may change according to your role.

The key point in the game? Identification. When you travel the dungeons, you may find something in the ground, or as a leftover from a corpse of something you killed. And usually, it is not identified (i.e. “a long sword”). This long sword could be cursed (it usually deals -2 damage if cursed, for instance, and being cursed means you can’t unwield it!), neutral or blessed… and it could be a magical sword (for instance, the Vorpal blade: spoiler from nethack wiki). And it goes like this for almost everything, making this game into some sort of joy of discovery mixed with killing strange monsters (like a… Quantum mechanic (spoiler again)!).

It is an enjoyable game, hard to leave aside once you start getting the mechanics and controls. You can play while you are on a coffee break ;)

Explore, and try. You may enjoy starting as a samurai, or valkyrie, I turned later to being a monk. But… you’ll die, a lot of times.

Perhaps today is a good day to die!

Try not to die from a kitten, or a giant ant… you’ll feel dumb. If you don’t mind spoilers, there is a nethack wiki which has quite a lot of information. Also, for an added twist, there is Tower (OpenGL Java based), where you start from the bottom of a tower, and travel up… in 3D! 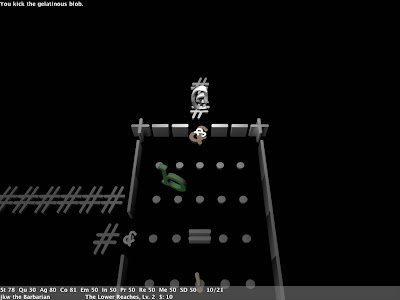 By the way, there is also an emacs mode for console-based Nethack.