The gnus logo,
from gnus homepage

When the time to choose a mail reader for emacs came, as part of my emacs 30 Day Challenge, there were not really a lot of options. A long, long time ago I had tried vm (view mail) with no luck. I don’t remember the details (it was something like 3 years ago), but the results where unappealing. The only contenders where gnus and wanderlust.

I managed to configure gnus pretty quickly: in only 30 minutes I had my gmail inbox working and was able to send mails through my main account. As an addition to gnus, I use bbdb to manage my contacts. You can read my post about bbdb and gnus integration.

I decided to give wanderlust a try, after reading a good review and configuration steps from emacs-fu. But had no luck (at least in my netbook), some kind of connectivity problem, probably due to some package which was not the correct version: wanderlust is very picky with what version of what package you have installed. I gave up and stood with gnus.

Installing and configuring gnus with gmail and multiple smtp accounts

If you have a recent emacs version, you’ll have already gnus installed and you can start it with M-x gnus. But it is far better to configure it first. And it is far better to start by installing gnutls or starttls, depending on your system. You can do this with your package manager in Linux, or using fink or macports in Mac OS. This allows you to use SSL to connect to your mail servers. This is also a required step to use twittering.el (to be covered in a few days) and I guess it is also required (or should be required!) by jabber.el

I use gmail, together with several accounts from mostlymaths.net, and have configured my main account in gmail to be able to send mails through all my other accounts. Let’s configure this. The following configuration is taken from the emacswiki with a few other tweaks from here and there. First C-x C-f ~/.gnus.el, and add the following lines, filling in your details

Now, we can configure the authentication process. Open ~/.authinfo and fill it with the following data

If you don’t like to store your passwords in plain text, you can either leave it blank (gnus will ask every time for your password) or use an encrypted authinfo file. I could not use this solution, as the emacs I have in my Mac has no encryption. But you can check it if you do!

Ready to use gnus! M-x gnus. After a few seconds of data processing, you should have a buffer named *Groups*. In gnus, you subscribe to groups, and the available groups should be your gmail labels. To subscribe to something, issue U followed by a double tab. This will show all the available labels. INBOX is the one you should not miss, of course. 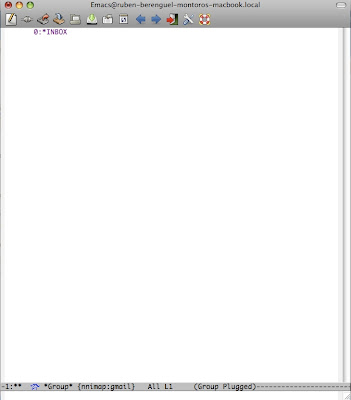 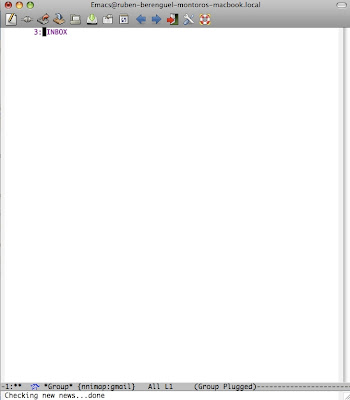 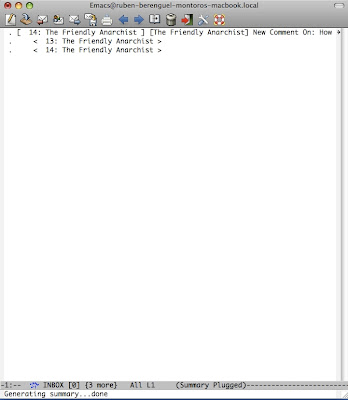 Once you have INBOX in your *Groups* buffer, you may need to update it for new mails. Pressing g will fetch new mails (or news) from the server. Pressing enter will open that group and show you your unread mails. If they don’t appear in the INBOX buffer, it is somehow usual. If you had already checked and read your mail, fetch again in the *Groups* buffer and press enter, it takes you to the old INBOX buffer, without the new mails. Press M-g in it to fetch new headers and summaries. Pressing enter in your mails of course opens them.

Now let’s say you want to move a message to the Trash folder in your Gmail account, or your Spam folder. Scroll to your mail and press B m (Backend command + move). Now you can choose which folder, and if everything worked smoothly, you could press double tab and show all folders. If not, write [Gmail]/Trash. This is the correct gmail trash folder. Once you are done with operating with your mails in this way, press M-g to really do move them to the trash (and by the way, marking them in Gmail as read).

To quit gnus, in the groups buffer press q (or Q if you don’t want to save “your progress”). In case of being lost… Please, use the menus: gnus has a menu for almost anything and they are quite descriptive. And more important, never leave gnus without properly q or Quitting. Also, in my netbook I can’t suspend to RAM and then be able to re-start gnus. I have to q first. But in my Mac it works correctly.

We are almost done covering the simplest way to use gnus. Of course, we want to be able to write emails, or reply to mails we got! In the INBOX buffer, that would be r while reading or selecting a mail. To compose an email out in the cold, you can either use m in INBOX or *Groups* buffers. If you are in any buffer, you can compose an email with C-x m.

And if you use bbdb (the big brother database, a contact manager with automatic fetching of gnus data), which I will cover in the next writing, you can compose an email after searching for someone (M-x bbdb query and then m in the resulting search results buffer). You can read about basic use of bbdb in A glimpse of bbdb and gnus.

Searching your mail through imap

And another interesting thing would be to be able to search within your mail. To do so you will need the nnir package and add a line in the imap configuration.

You should subscribe to [Gmail]/All mail, and then press G G to search within your mail. This is a little slow… But works.

I’m still fiddling with gnus, and learning to use it more effectively, but this can get you going with using it for reading your mail. If I learn something new along the way (or someone more used to gnus posts it here) I’ll add it here or in a new gnus post.

If you enjoyed this, please share it with your emacs friends through Reddit, Hackernews or whatever you enjoy.