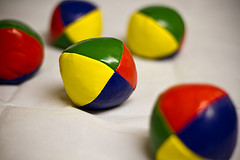 No, this is not a tutorial (but I do have written the standard steps to learn below). I began learning to juggle very recently. I just want to answer a possible “why”?

I’ve always been fascinated by juggling, and every time I wanted to eat more than 2 small oranges I’d try my hand at juggling them. Always followed by bowing and picking them from the ground, of course.

A few weeks ago I was in Dublin for a few days, and in a bookstore I saw a pack of juggling balls (3 balls) and promptly bought them. With them, a small leaflet explained the method, and as soon as I was back home I tried to learn the trick. I’ll give you a quick overview:

But what’s the point? Of course, it’s fun to watch, and maybe it is fun to do for a while. But, in the long term?

I can’t be sure, I’m just a data point and I’ve been in it for just shy of 3 weeks (on and off, since in July I’m doing quite a lot of The Fancy Puffin work and it cuts my “fun” time.) But this is what I found.

First thing I noticed, juggling clears my mind pretty effectively. It is not as good as a good meditation session, but while you are juggling (or at least, in the beginning) you can’t think of much else. I practised for a few minutes each night

After a few days I noticed something else. My back felt straighter, and I had less back and shoulder pain. When you are juggling you have to keep your back very straight, stand up and move your arms. Something most programmers and people working with computers don’t.

I don’t know if both these secondary effects will last long. But I thought some other fellow geeks would be interested.